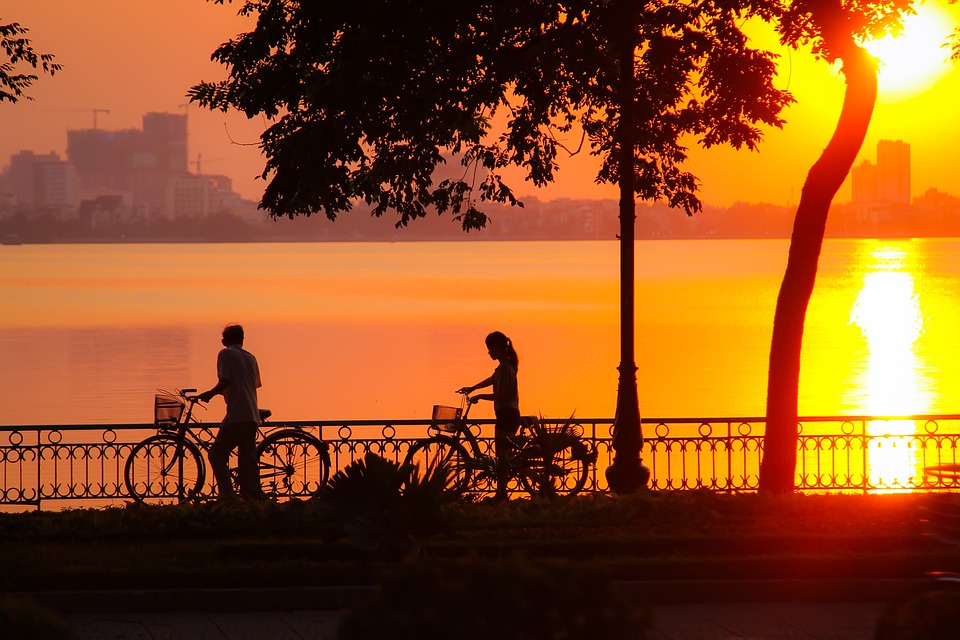 West Lake Hanoi - What to See & Things to Do

West Lake (also known as Ho Tay Tay Ho) is one of the most famous tourist attractions in Hanoi and can also be considered as an iconic place of the capital city of Vietnam. Having a serene and tranquil beauty, West Lake Hanoi would definitely be a proper choice for those who are tired of the hustle and bustle of modern life.

Being there, tourists (or even locals) looking for respite can totally be satisfied as West Lake offers a harmonious combination of poetic lake, solemn historic areas, amazing activities, and unforgettable food.

Want to know things to see and activities to do in and around West Lake Hanoi? Check the list below!

7 Things To See Around West Lake

This is the oldest Pagoda in the capital of Vietnam. Tran Quoc Pagoda, which is now located on an islet within West Lake, was built in the 6th century during the reign of King Ly Nam De and is respectfully considered as a cultural symbol of Vietnamese Buddhism. If you have been there for the first time, you will be highly likely to be surprised by a number of intricate statues carved in 1939, each of which has a unique facial feature.

Tran Quoc pagoda ’s opening hours are from 8 a.m to 4 p.m, thanks to which, tourists would have enough time to completely enjoy the specific architecture and stunning sunset view the Pagoda has long been famous for.

The solemn beauty of this pagoda has been recognized on the global scale as it was voted by The Daily Mail (UK) as one of the 16 most beautiful pagodas in the world.

This temple is now set on the corner of Thanh Nien Street and Quan Thanh Street, facing West Lake.

According to the legend, in the past, to protect Hanoi from the bad spirits, the citizens here decided to build four sacred temples (so-called Tu Tran Thang Long) in four directions of the city. These temples are Bach Ma (in the East), Kim Liem (in the South), Than Linh Lang (in the West) and Quan Thanh (in the North).

Quan Thanh temple, worshipping Huyen Thien Tran Vu, serving as the protector of the Northern areas, was built during the reign of King Ly Thai To (1010 1028). It is based on Chinese style, meaning that it has an outer gate, a triple gate, and a courtyard.

The first thing impressing the guests to this temple is its exotic outer gate. This gate has four pillars, each of which has the image of one phoenix. Four phoenixes on four pillars fight each other and there is a giraffe on the top.

Going inside the temple, tourists will find a shrine containing the famous 3.6 meters (approximately 12 feet) bronze statue of God Tran Vu. He is holding a snake and a tortoise, which, in Vietnamese religion, represent wealth and protection, respectively.

Quan Thanh Temple is open to all sightseers as well as people who want to pray for health, luck, and happiness.

Established in 1908 by the French colonial government, this is one of the oldest high schools in Vietnam. This school is special for its French-styled architecture. A large number of ancient trees in this school also promotes its specific beauty, making it not only a historic place but also a tourist attraction.

This is a special pagoda as it worships not only Buddha but also Mrs. Pham Thi Ngoc Do, one concubine of King Le Thanh Tong. The reason behind this is because Mrs. Pham was the first one who taught people in this region the weaving profession. Thien Nien Pagoda, though has little spectacular architecture as well as historic relics, attracts thousands of Buddhists and visitors each year.

Located on Lac Long Quan Street, this pagoda is dedicated to Buddha and Princess Lieu Hanh. Van Nien Pagoda has its architecture affected significantly by the Nguyen Dynasty ’s style. This complex contains a triple gate, the main pagoda and a Temple of Goddess.

Considered as a national relic, this one-thousand-year-old pagoda is among the oldest ones in Hanoi, housing an overwhelming set of relics, including more than 40 round statues and 10 imperial edicts (which recognized Princess Lieu Hanh as a Goddess) since Tay Son, Le Dynasty. This makes Van Nien Pagoda not only a spiritual place but also a sanctuary for Vietnamese historic and cultural values.

Vong Thi Pagoda was constructed during the reign of King Ly Nhan Tong, has gone through numerous wars, and witnessed Viet Nam’s ups and downs for more than a millennium.

This place worships Aide-de-camp Muc Than of King Ly Nhan Tong. Over time, the pagoda has been severely devastated and had to be restored many times; however, the cultural, as well as historical values of it, is undeniable.

According to the legend, this place was built in the reign of King Tran Thanh Tong for the purpose of worshiping Prince Linh Lang, who considerably contributed to the Vietnam war against Nguyen Mong. This was also the place where Prince Linh Lang used to live, read books, enjoy poems, practice literature and martial arts as well.

Tao Sach Pagoda was constructed in folk style, including a triple gate, contemplation rooms, and other religious constructions. In addition, visiting this pagoda, tourists will have an unforgettable chance of seeing various Han Nom documents and priceless relics.

So, other than sightseeing, what to do next? The answer is a lot of recreation activities waiting there for you!

Every single afternoon, you can see people both in the neighborhood and from faraway places exercising and relaxing on their bikes while touring around the serene lake. West Lake Hanoi is such a great place for exercising, especially cycling, which is one of the most enjoyable activities around the lake. Besides, there is also free equipment for everyone to have a morning or afternoon exercise session here.

Taking up a corner of West Lake, this busy and interesting water park takes its inspiration from the gorgeous city of Santorini in Greece. It is popular among families with kids who want to have an amazing time playing a variety of adventurous water sports in the hot summer.

West Lake is also a perfect dating spot for couples. They can simply sit on a stone bench facing towards the lake and watch as life goes by. Or they can hire a swan pedalo to sail around the lake while having small talks with each other.

Sometimes, the traffic jams and the hurried lifestyle of Hanoi make you wonder: “Why Hanoi is  being considered ‘the city of peace’?” If you are feeling that way, you are highly recommended to stop by some of these peaceful cafés, such as Maison de Tet Décor, Maison de Blanc, LeMarz Coffee Roastery, 6 Degrees and so on.

The picturesque scene and the romantic architecture of these coffee shops will definitely enlighten you about the answer to the question above. In these places, you can just relax as time flies with your cup of coffee or tea. You can use that time to enjoy a book, to talk to friends, or just to watch the surrounding scene for hours. The possibilities are endless, but they all aim at one result, that is, you feel Hanoi’s peaceful spirit again.

Referring to Hanoi, it will be imperfect not to mention the long famous shrimp cakes in Tay Ho West Lake. Since a long time ago, shrimp cakes have been mostly sold on Co Ngu street near West Lake (now is Thanh Nien Street); therefore, whenever people think about food in West Lake, shrimp cakes become the first dish to be mentioned.

Shrimps to make the dishes must be caught from West Lake, then, every two shrimps will be fried with a crispy crust, forming a perfect shrimp cake.

“Shellfish” (Ốc) is a special kind of species in Viet Nam, and shellfish vermicelli soup in Thuy Khue Street has become a popular dish for gourmets since such a long time. The reasons behind this dish’s fame are not only its fantastic taste but also its careful as well as clean preparing and cooking processes. The sweetness of the broth, mixed with the sourness of tomatoes, goes harmoniously with the specific taste of “ốc”, forming an unforgettable shellfish vermicelli soup, which can definitely impress every visitor. This is really one of must-try Hanoi West Lake food for any tourist.

Near West Lake, there are a lot of coconut ice cream parlors. Visitors can easily enjoy this special ice cream while resting along West Lake. What makes this type of ice cream so outstanding is that the coconut ice cream is put into …. a coconut. The coolness of the cream, together with the coconut flesh and the fruit syrup, makes relaxing nearby West Lake even more refreshing.

6. Take Photos with the Lotus Pond

In this largest natural lake of Hanoi West Lake, people can gently get released among the lotus flowers in each blooming season. Visitors going here usually choose to wear “Ao dai” Vietnamese traditional costume to take some photos with the lotus flowers also our national flower. This activity is largely preferred by women, as the blooming lotus flowers truly form a feminine and wonderful view.

How to Get to West Lake

Being Hanoi’s largest freshwater lake in Hanoi, West Lake has an impressive perimeter of around 17 kilometers, along with a total area of more than 5 square kilometers.

Since West Lake is located in the North West of the inner city (in Tay Ho District) , it is not far from many other well- known places. Therefore, visitors can flexibly travel to other famous Hanoi attractions such as The Old Quarter, Uncle Ho Mausoleum or so on when being at West Lake.

This area is also the intersection of a number of routes, thus, getting there would not be a challenge:

Visiting Hanoi but not going to West Lake would be one of the most regrettable things you have ever done in your life. The natural beauty, the excellent food and huge cultural values here form a perfect combination, which is sure to take everyone’s breath away.