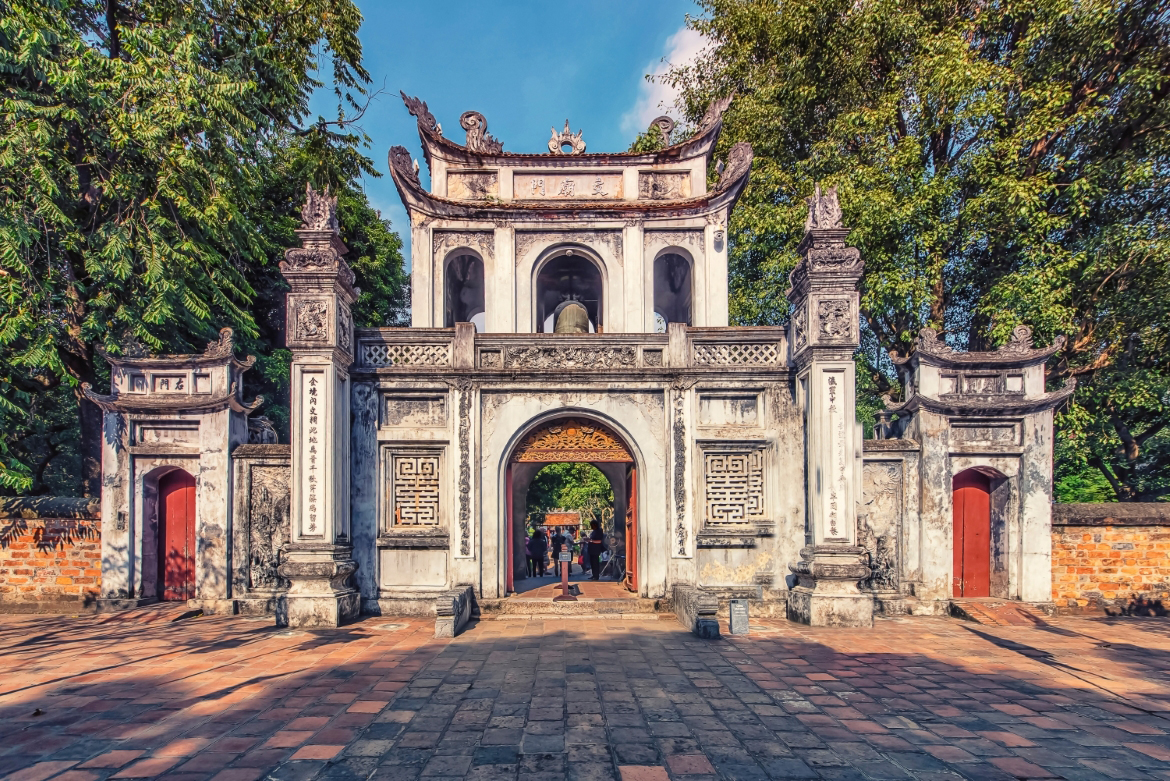 A Peaceful Corner with Historical Imprints

If you are traveling to Hanoi, the ancient capital of Vietnam, besides the number of motorbikes on the road, you are also impressed by how busy and crowded this city seems to be.

Hanoi also boasts an endless amount of grandeur, history, and magical tales that can enchant even almost any traveler. Entangled with hidden attractions of serenity and peace, this city possesses a treasure with historical imprints, which was considered the first national university Temple of Literature.

Visiting here, you will know there still exists a place of quietness in the city center.

Located to the south of the Imperial Citadel of Thang Long, Temple of Literature was founded in 1070, almost 1000 years ago, by Emperor Ly Thanh Tong as a temple to worship the Chinese philosopher Confucius.

In 1076, his son established the Imperial Academy as a royal school for only members of the elite such as princes, nobles, and bureaucrats.

The Imperial Academy, which was considered as the first university in Vietnam, opened for about 700 years and educated hundreds of well-known scholars and mandarins. Despite continuous wars and disasters, the Temple of Literature remained its precious architectural and cultural value.

Covering an area of over 54000 square meters, Temple of Literature, which is surrounded by an ancient brick wall, consists of five courtyards in different styles. The whole area consists of several main parts, which are described below.

Taking your steps over the big gate of the first courtyard (the Great Middle Gate), you find yourself in varying shades of green and leave outside the hustle and bustle of Hanoi.

The gates on the left and right side are called Virtue Gate and Talent Gate respectively, which depicted the expectation of the King towards students attaining high education here.

All of a sudden, you may notice that there is a symbol of a fish on top of the gate. Legend has it that God holds an annual competition for the fish, and the one, which is able to leap over the strongest waves to jump to the other side of the waterfall, will be transformed into a powerful dragon.

Actually, that fish represents a student. Only by studying strenuously and nonstop trying can he be knowledgeable and brilliant enough to pass all the exams and become a government official.

Back in that period of time, students learned all about Confucius’s point of view, literature, and Chinese culture. There were 3 rounds:  Regional exam (Hương examination), National exam (Hội examination) and Royal exam (Đình examination), which took place one year after the former. In case someone was not lucky or talented enough, he would have to wait for the next 3 years to take part in the exam.

A symbol of Hanoi, a familiar image featured on the back of the 100,000 Vietnam dong banknote is Khue Van Cac, the Pavilion of Constellation). This unique architectural work was built in 1805 with four white-washed stone stilts.

Khue is the brightest star in the sky and the whole constellation is shaped like the character of “Literature” in Chinese. It implied the wish for prosperous and developed education. Inside the courtyard, a thousand-year-old bronze bell hangs from the ceiling and is only rung on auspicious occasions.

The third courtyard with square shape is also known as the Well of Heavenly Clarity.

Is this square-shaped well weird? The meaning behind is that the square represents the earth while the circle at the top of the pavilion represents the sky, all together created a harmony between the sky and earth. This well functions as a mirror absorbing the best essence of the universe.

More than that, in addition to maintaining the tranquil atmosphere of the Temple of Literature, the well also helped students see themselves and dress up before entering the sacred inner part.

A glimpse over the side of the courtyard will reveal a house of stelae, which is unique in the world. In this section of the courtyard, stone turtles carried large stelae on their backs, praising Confucianism and the Emperor, writing the philosophy of that dynasty and listing information about the exams and the Doctors.

There should have been 116 stelae, but only 82 remained today as a result of wars. The shape and size of the turtles told us about architectural style in the dynasty.

Why turtles? The answer is in Vietnamese culture, the turtle is the only real animal out of 4 holy ones, including Dragon, Unicorn, Turtle, and Phoenix. Not only is Turtle familiar with the mental life of Vietnamese people, but it also presents longevity and wisdom, like what it carried on its back, knowledge and successful people.

The fourth courtyard the gate to great success (meaning in Vietnamese), featuring the stunning House of Ceremonies and the sanctuary to Confucius, is outstanding in the complex because of its red columns and wood beam ceilings from which antique-style lanterns hang.

Right in the middle of the sanctuary, there is a typical altar existing in each and every house of Vietnamese families. The altar is always laid in the center and most sacred place of the house where people worship their ancestors. In the altar, there must be 5 basic elements including Metal, Wood, Water, Fire, and Earth filling with offerings and smell of incense.

When you visit this courtyard, don’t forget to find out what presents those elements!

On each side of the altar, there is a pair of crane and turtle. They are considered to be good friends and present a desire for harmony and eternity.

5. The Fifth Courtyard The Grounds of Imperial Academy

The fifth courtyard is made of 2 floors. The ground floor has a statue of Chu Văn An, a great teacher and the first rector of the Imperia Academy, who devoted all his life to Vietnamese education. There are also pictures and artifacts about Confucian education in Vietnam at that time.

III. How to Get There

The temple is located about 2-3 km west of Hoan Kiem Lake and south of Thang Long Imperial Citadel.

You can get to Temple of Literature in just 10 minutes using a taxi and about 1 hour walking on foot from Hoan Kiem lake.

Hanoi is such an interesting city that offers a number of interesting Hanoi attractions and sites to visit. Anyone who is either curious about Vietnam long fascinating history or love discovering some architectural and cultural features of Hanoi should not miss Temple of Literature.

Not only does Hanoi open a space for you to relax, but also a chance to understand more about Vietnam. Don’t forget to comment below and share your experience if you have been to this wonderful place!