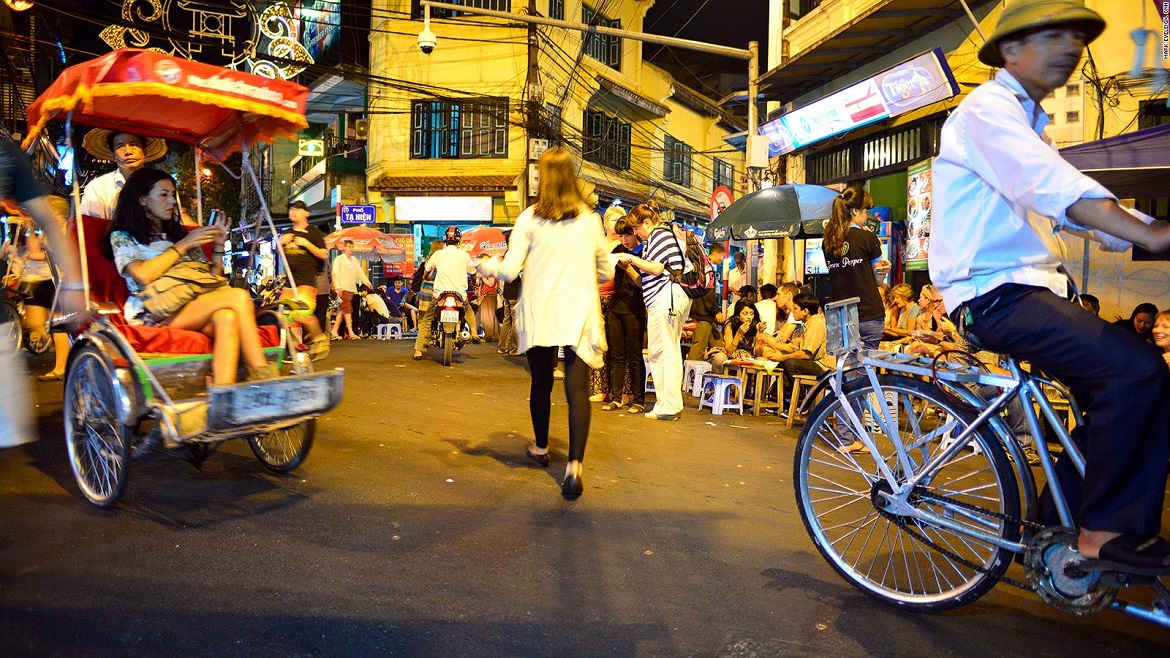 Differ far from the noisy image of Hanoi in the daytime, Hanoi at night brings a charming and romantic beauty fascinating to everyone’s heart. When night falls, streets gradually sink into the darkness, it is time to discover the special beauties of the city.

The beauty of Hanoi at night is a combination of two opposite beauties which express clearly the difference between an old capital and a new one.

The capital of Vietnam is famous for not only peaceful poetic streets with white ancient houses standing quietly side by side under the yellow lights of street lamps but also rows of old trees on both sides of roads in the Old Quarter. There are also bustling streets crowded with people and full of restaurants, shops, bars, etc.

Some of them have become typical features of Hanoi in the eyes of international friends. The most typical is Bia Hoi Corner (also called Bia Hoi Junction), a destination that the foreign who come to Hanoi for the first time must go. Why does it become so popular? How to get and what to do there? Today, you will get to know useful information to make a plan on exploring the most famous bustling street in Hanoi Bia Hoi Corner.

Nowadays, fresh beer has become a familiar drink of the Vietnamese, the drink that you can find and buy easily anywhere from luxury restaurants to vending machines, small grocery stores, from city to countryside. However, not many people know where it came from and when it was first imported in Vietnam.

Fresh beer is said to have appeared in Vietnam from the end of the nineteenth century by French colonists. When they came here, they had brought and left in Vietnam their culture, lifestyle, architecture, and even food, and drink. Especially in Hanoi, you won’t have difficulty in finding corners or structures like in France.

Although the origin of beer is not Vietnam, the Vietnamese have changed it and turned it into a typical feature of Vietnamese cuisine.

So, what is the difference between fresh beer and Bia Hoi culture in Vietnam and in the others?

There are some differences between fresh beer in Vietnam and in other countries, as follows:

It is true to say that beer seems more delicious when you drink with many people. Maybe, it is the reason why Bia Hoi Corner appeared and has become very popular in Hanoi. Bia Hoi Corner or Bia Hoi Junction or Bia Hoi Old Quarter or International Crossroad is an area from the beginning of Ta Hien Street to the intersection of this street and Luong Ngoc Quyen Street in Hanoi Old Quarter, which is full of street diners selling types of beer and street food, the most popular destination well-liked by both the young locals and foreign tourists.

If Ho Chi Minh City has Bui Vien Street, Hue has Pham Ngu Lao Street, Hanoi has Ta Hien Street. Ta Hien Street or Hanoi Western Street or not sleeping street usually called by the locals is an old street in the Old Quarter. It is only 226 meters long but the most famous and bustling street in Hanoi now.

Coming there at different times of the day brings tourists different experiences. In the early morning, when the sun shines, Ta Hien is also quiet and peaceful as other streets in the Old Quarter. The sun shines every corner of the small street, covers all the red roofs, white walls and green wooden windows of the small house which were built in French-style architecture in the previous century standing side by side on the street. How poetic it is!

Opposite to this image is the noisy bustling image at night. When night comes, Bia Hoi Corner sinks into colorful lights from street lamps, restaurants, bars, and clubs and full of the aroma of tasty street food. It is always crowded with locals and foreigners until the late-night even during the week. It is not difficult to see groups of people sitting on plastic stools spilling out of the street smiling and chatting happily.

What to Do in Bia Hoi Corner

Bia Hoi Junction at Ta Hien Street is a suitable place to gather with friends, especially with those who don’t live in Hanoi or who first come here or foreign friends. Nothing is more wonderful than sitting with friends, drinking beer in a vibrant atmosphere after the stress working hours to forget worry in life temporarily. Or maybe after coming here, you will make friends with many people because at Bia Hoi Corner, no one is a stranger.

Before, going club was something not good in people’s thought in Hanoi, but now, it has become a relaxing trend of the young with the development of society. There are many famous bars, pubs, and clubs sited around Bia Hoi Corner such as 1900 Le Theater, Funky B, Prague Pub, Mao’s Red Lounge, Hay Bar, where tourists can enjoy beers, foreign wines, cocktails in tunes of living music. A note is going club is only allowed for people aged 16 and over, so you should bring identification to prove you are old enough to enter.

What to Eat at Bia Hoi Junction

Besides the beauties of the architecture and activities, Bia Hoi Corner is also renowned for its diverse street food and traditional cuisine. Tourists can try a lot of yummy Vietnamese street food here at affordable prices.

First of all, the specialty that makes name for Bia Hoi Corner is fresh beer. It will not be entire if tourists come to visit Bia Hoi Junction without drinking a glass of beer. The image many people sit on plastic stools, spill out of the street and hold a glass of beer on their hands is a familiar scene of Bia Hoi Corner.

You can find all types of beer from domestic types to expensive famous imported ones at different prices between 7.000 VND and 40.000 VND a glass. It is worth drinking beer at Bia Hoi Corner once since you can not find such an experience anywhere like here.

Though there are also a lot of restaurants serving this dish in Hanoi, many people said that nowhere is as delicious as at Bia Hoi Corner. Honey-grilled quail is another specialty served by an old diner for more than 20 years and well-liked by many people when visiting the street.

You only spend about 35,000 VND buying up to 4 honey-grilled quails. The attractive points of this dish are the greasy fragrant flavor, crispy and tough chicken meat that is crunchy on the mouth and you can even eat bones.

Bun Bo is a very well-known and popular dish for Vietnamese people and tourists. How to cook this dish is different according to regions and Bun Bo Ta Hien in not sleeping street is quite special. It is still sweet and delicious beef, but here the beef is fried with garlic, the rich taste, the noodles are mixed with other ingredients such as bean sprouts, melons, pineapple slices … How delicious it is!

Bun Moc is another type of traditional noodle in Hanoi which is also well-loved by the locals and tourists can try a bowl of noodles cooked in the traditional way in a diner at Ta Hien street.

The highlight of this dish lies in “Moc”. “Moc” at Bun Moc Ta Hien is a mixture that is made manually by mixing ground meat, black fungus, spices…, brings the sweet and soft flavor to guests. The diner selling this dish at Ta Hien street is only a small one in the corner of the street but always crowded as the taste is second to none.

Though cheese sticks, fermented pork roll, chips are not traditional cuisine of Vietnam, their popularity is not inferior. The aromatic and crunchy taste of these dishes combined with fresh beer, peach tea, lemon tea will give tourists a warm evening with friends.

How to Get to Bia Hoi Corner

Bia Hoi Corner is located in Hanoi Old Quarter, at the intersection of Ta Hien Street and Luong Ngoc Quyen Street. Tourists can pay a visit here by bus, by motorbike or on foot. It takes visitors 10 minutes to walk from Hoan Kiem Lake now that this place is 250 meters from the south of Hoan Kiem Lake.

There are some useful tips for tourists who first come here: