As one of oldest cities in the world, Hanoi certainly has its own way to stand out from fellow Southeast Asian cities. Its rich culture is reflected on one of the most ancient historical sites: the Imperial Citadel of Thang Long. In this article, we will walk you through the best architectural and cultural patterns of this phenomenal site, which earned it the title of UNESCO World Cultural Heritage Site.

Location: The Imperial Citadel is located at 19C Hoang Dieu Street, while the archeological site is at 18 Hoang Dieu Street.
Opening hours: 8:00 - 17:00 everyday, except Monday
Entrance fee: VND 30,000 for locals and tourists, VND 15,000 for Vietnamese students. Admission to children under 15 is free of charge.

I. History of the Imperial Citadel of Thang Long

The origin of the Citadel dates back to the 7th century, when its very first foundation was set up. Vietnam was under Chinese invasion at the time, and a Chinese fortress was said to be built in the area. In 1010, King Ly Thai To moved the capital from Hoa Lu (Ninh Binh) to Dai La (former name of Hanoi) and renamed it Thang Long. The Citadel was built in the same place, over the top of the torn-down fortress. From then on, the Citadel had remained the center of regional political power for 13 consecutive centuries.

The Imperial Citadel was expanded under Tran, Le and Nguyen Dynasty, with several occasions of major destruction by war. It remained the seat of the Vietnamese Court until 1810, when Emperor Quang Trung moved the capital from Thang Long to Phu Xuan (now known as the Imperial City of Hue), and Thang Long was no longer the capital of the country.

During the French colonial era, the royal palaces and most of the structures were severely damaged. By the 20th century, a number of the remaining structures were torn down. The Citadel was used by the Imperial Japanese Army to imprison over 4000 French colonial soldiers captured in March 1945. During 1954, when the Vietnamese Army took over Hanoi, the Citadel became the headquarter of the Ministry of Defense.

In the 21st century, the ruin foundations of Thang Long Imperial Citadel were systematically excavated. In 2004, a number of artefacts and items between the 6th and 20th centuries were excavated, including foundations of old palaces, ancient roads, ponds and wells.

II. Cultural Values of the Imperial Citadel of Thang Long

The Imperial Citadel of Thang Long is an outstanding place of interest not only for the capital city, but also for the country as a whole. The Citadel witnessed a series of dramatic changes throughout the history of Vietnam and braced itself through a number of destructive wars.The most notable part of the Citadel is the Central Sector, which was listed as one of the UNESCO Natural World Heritage Sites in 2010.

The Central Sector of the Imperial Citadel of Thang Long expresses a set of intercultural exchanges with major influences from China in the north and the Champa Kingdom in the South. It’s also historically significant, hosting the center of political powers from the 7th century to the 20th century. In the official representation to nominate the Thang Long Citadel to be on the World Natural Heritage List, the Citadel’s cultural values were cited as “to be found in the way the site manifests, in exemplary detail and over a long span of time, the interchange of human values in the development of Asian architecture, construction technology, town planning, monumental and plastic arts and landscape design…”.

Although a large part of the original construction was lost, the site is still currently under excavation by archeologists. The artefacts found are expected to help the authorities provide a better and clearer demonstration of the Citadel.

III. Architecture Features of the Citadel

There are 5 significant sectors to the Imperial Citadel of Thang Long.

Flag Tower is known as one of the most iconic symbols of Hanoi. Rising 33.4 meters from the ground, the Tower consists of four main structures: the base, the second floor, the third floor and the top. The third floor featured four doors in the four different directions. The top is a cylindrical pillar with the Vietnamese national flag on top. Built in 1812 under the Nguyen Dynasty, the Flag Tower survived over the French colonial era, when it was used as a military post.

Situated in the heart of the Citadel, Kinh Thien Palace is the central relic in the complex. It was built in 1428 and used a place to celebrate imperial ceremonies and major national affairs. The palace’s foundation is 57 meters long, 41.5 meters wide, 2.3 meters high. Despite being a culturally significant relic, the only remains of Kinh Thien Palace to the present day are the steps. You will find the sophisticated dragon statues carved on green stones along the stairs.

Doan Mon was built in the Le Dynasty and located to the south of the Citadel. Only members from the royal family were allowed to pass this gate. There is one main gate in the middle and four smaller gates on the sides. The gate is now decorated with lotus-shaped lanterns that are lit up at night, adding a mystical beauty to the Citadel.

Bac Mon is located to the north of the Citadel. Together with Doan Mon, these are the only two remaining gates of the Citadel. Built with brick and arches of stone, the gate is now used as a place to worship the two former governors of Hanoi: Nguyen Tri Phuong and Hoang Dieu. They stood as loyal subjects to the Vietnamese court under the invasion of the French colonists in the 19th century.

Hau Lau (literally “the tower in the back”) was built of brick and consists of a basement and 3 floors above. The Pagoda was constructed for the use of princesses and queens. The French called Hau Lau “Pagode des Dames”. At the end of the 19th century, Hau Lau was severely damaged, after which the French rebuilt the monument as today.

From 1954 to 1975, the Citadel, coded D67, was used as the headquarter of the Vietnamese People’s Army. A connecting tunnel allowed for emergency evacuation in case of an attack. The house and tunnel are situated to the north of Kinh Thien hall. D67 house was built in 1967, with modern architectural style, 60-centimeter wall and good soundproofing system. Rooms with various purposes are found here: meeting rooms, break rooms and working rooms. The objects and items used during the Vietnam War are on display, including soundproof doors, maps, telegraphs and the aircraft’s notice board.

IV. How to Get to the Imperial Citadel of Thang Long

The site is situated in the heart of Hanoi and only a short walk away from other attractions such as Cua Bac Church, Quan Thanh Temple and Vietnam Military History Museum. It’s about 2 kilometers from the center of the Old Quarter.

You can easily reach the site by taxi, motorbike or Grab. Bus is another sound option as there is a bus stop very close to the entrance.

V. Tips to Visit the Imperial Citadel of Thang Long

There are only a few things to bear in mind before visiting the Imperial Citadel:

The Imperial Citadel of Thang Long is one of the most remarkable historical sites in Hanoi. This UNESCO-listed Heritage Site is a destination you should not miss while staying in Vietnam. The interesting excavated items and mock-ups of the citadel will certainly give you a better understanding into Vietnamese cultures and history through thousands of years. 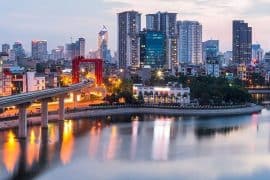 Top 5 Best Areas To Stay In Hanoi, Vietnam for Any Budget