Bach Ma Temple in Hanoi: A Must-Visit Sanctuary of the Ancient God

A Famous Temple in Hanoi

Located in the heart of Hanoi Old Quarter, Bach Ma Temple is regarded as a remarkable historical monument associated with the event of King Ly Thai To’s capital relocation. It stands among the Four Guarding Temples of Thang Long Citadel which were established to form an enclosing boundary of strongholds around the city and deal with potential threats.

I. History of Bach Ma Temple

Bach Ma Temple was built in the 9th century, acting as a place for the worship of Long Do the ancient god of Hanoi. Legend has it that Long Do the God deserved great credit for prevailing over the practice of witchcraft by Cao Bien, General of China’s Tang Empire.

Formerly, the temple was named Lon Do. Then, it was changed to Bach Ma to tell the story of King Ly Thai To’s relocating the imperial capital from Hoa Lu to Thang Long (Hanoi nowadays) in 1010 AD.

Plenty of historical records say that the King kept failing in his attempt to build the new citadel without any clear explanations. Only when he got his courtier to pray did he notice a white horse coming out of the Lon Do temple, wandering and leaving tracks on the ground before vanishing. From that moment, Ly Thai To ordered to build the citadel walls alongside of the marked tracks and succeeded in moving forward till completion. Since then, he decided to change the name of Lon Do Temple to Bach Ma (meaning “white horse”).

Bach Ma Temple has been recognized as an outstanding construction and kept restoring in the reign of many dynasties. Its layout was adapted from the shape of the word “Three” in Chinese. From the outside, the temple looks like a 8-roof communal village house embellished with ancient patterns which bear a significant resemblance to Hoi An fine arts. Most pillars and wooden beams are well carved, antique pictures are well refined by skillful engravers, rendering an aura of nostalgic grandeur to Bach Ma Temple.

The temple is believed to be so sacred a place in Hanoi which French colonialists and troopers in the 19th century could not have enough courage to vandalize or even relocate its property. As a consequence, Bach Ma remained as a typical embodiment of the Nguyen Dynasty’s architectural ideas and styles.

Take a look at the interior hall and you would notice an unorthodox tie-beam composition made of iron wood, playing a key role in not only decorative art expression but also bearing capacity. Besides, there are a large number of altars featuring sophisticated art forms of engraving, not to mention valuable antiques such as paintings, imperial titles, ancient weapon samples,  stone stelae, metal bells, palanquins…

III. What to Do in Bach Ma Temple?

Usually, people pay a visit to Bach Ma Temple so that they can admire evidence of ancient engraving artistry and the serene ambience it creates. However, if you have a chance to travel here from Feb 12th to Feb 13th (Lunar Calendar), you should find yourself immersed in the solemn atmosphere of Bach Ma Temple’s annual traditional celebration.

On Feb 12th, groups of palanquin bearers, unicorn dance team, drum crew, flag crew, etc. will walk in procession from Ma May street back to Bach Ma Temple. Later, the rite of sacrifice is performed, regarded as a crucial part of the whole ceremony. Not until all the main acts are done are visitors allowed to enter the temple and take part in other activities. On the next day Feb 13th the elders will continue to promote more rites of sacrifice, while mini-events of entertainment and art forms are held to attract the public. These days also emphasize a host of cultural celebrations and Vietnamese folk games, namely tug of war, cock-fight, human chess, festival song competition.

IV. How to Get to Bach Ma Temple

Bach Ma temple is situated in the center of Hanoi Old Quarter, making it a little difficult to find the way due to the city’s narrow and crowded streets. The following route is typical for tourists to take: Start from Nguyen Thai Hoc Str. Cua Nam Str. Phung Hung Str. Hang Vai Str. Hang Buom Str. Bach Ma Temple at No.76.

The problem of transportation in Hanoi can be tackled by simple solutions: Choosing the right means of transport and a good tour guide if you can. 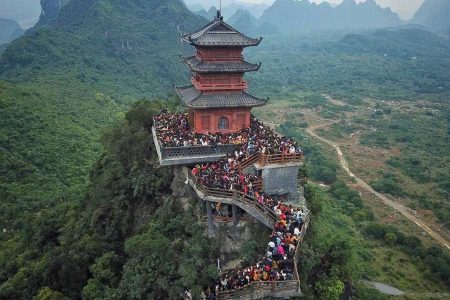