In comparison with other developing countries, Việt Nam’s population enjoys a relatively high standard of education. In the past, Vietnam’s educational system was affected by many cultures, of which the Chinese and French  had most significant influence.

The earliest students in Vietnam received most of their education from the Buddhist clergy. However, with the 1000 year Chinese domination, Vietnam has been much affected by its educational system.This is especially shown in the early competitive examinations held to recruit high mandarin officials. The first examination of this type was held in 1075. With the beginning of these examinations, Confucian education formerly replaced it by the Buddhist clergy’s one.

During the latter part of the 11th century, a National College was established for the education of sons or royalty and other high-ranking officials, which marked the beginning of Confucian education in Vietnam. In 1252, the college was opened to students from various backgrounds besides royal or official ones.

At the beginning of the 15th century, many Confucian-type schools were in operation in leading centers. Those days, education became the most cherished ideals. Only those who passed the qualification examinations for Mandarins had any hope of achieving state-owned jobs or other honors. The scholar was looked up to and highly revered.

Before the French came, the old-type Mandarin system administered Vietnam for approximately 2,000 years. As the French took over the government’s administration, it was converted from a Confucian system into a Western-oriented one.

In order to participate in the civil service under the French rule, the Vietnamese had to convert to the French system and were required to know the French language. In addition, they had to have a good facility with the new romanized version of their language instead of the traditional Chinese characters which had been in use for hundreds of years.

The French allowed this to co-exist with their system for a period of time. At the beginning of 1900, the whole system was revised. An educational system of three levels was established; elementary, primary, and secondary education (au hoc, tieu hoc, and trung hoc). In addition, the use of Quoc Ngu, the romanized translation of the spoken language, was added to the curriculum. Emphasis was placed on rote memory, class discipline and other French educational methods. Many new schools and colleges were established. Accordingly, French became the second language of much importance to the students.

Though Vietnamese schools have been influenced by the Chinese and French, they are now affected by the American. Nevetheless, some of each culture has been maintained.

In addition to these public institutions, there are numerous private schools which have sprung up, offering courses in English. It is common to see Vietnamese of all ages enrolling in one of these extra-curricula schools.

There are also private schools run by religious and organizational groups, some of which are French. These have been closely administered in the past and must comply with South Vietnamese government standards.

Undoubtedly, Vietnam educational system has improved significantly over the past years and kept up with developed coutries’ systems. 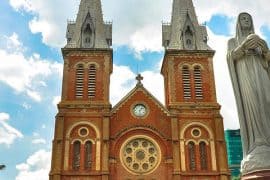