Apart from beautiful beaches and breathtaking scenery, Quy Nhon is also home to many Cham monuments and relics. As the Cham people ruled this region for more than 500 years from the 11th to 15th century, they left behind many Cham towers. Until now, there are still 14 well-preserved towers with typical features of Cham architecture. Among these towers, Cham Twin Towers (Tháp Đôi) is the most outstanding that you should not ignore in your trip to Quy Nhon, Binh Dinh.

I. Why Twin Cham Towers?

Twin Cham Towers is the most accessible of all the Cham towers in Quy Nhon the ancient capital of the Cham people. Paying VND 10.000 for entrance fee, you can visit this tower, which is about 3 km to the northwest of the city center. Built a very long time ago, it is considered one of the representative symbols of Vietnam.

As its name suggests, the Twin Cham Towers consists of the 2 towers standing side by side like a couple. Like other towers in the province, its architecture is imbued with typical cultural features of the Cham people and influenced by Hindu art. These 2 towers will give you a chance to discover the typical traits of Cham architecture, get a better understanding about Vietnam’s history, and take some nice photos. Besides, you can enjoy some peaceful moments and an escape from the hustle and bustle of Quy Nhon city as the Twin Cham Towers is located in the middle of lush coconut palms, and banana gardens.

Twin Cham Towers was built from the 10th to 15th century. During this time, there is a great exchange between Champa and the Khmer Empire, which leads to significant influence of carving and architecture traits on the towers.

Undergoing a long history, it has witnessed many wars in Vietnam. Therefore, the towers were ruined a lot. Until 1991, the authorities decided to restore the Twin Cham Towers as it plays an important part in showing the Cham’s culture and architecture. After restoration, it almost got the  initial appearance. Now the 2 towers lie on a spacious plain foot of a hill, facing the South. Though they have the same square-shaped structure and curve roof, the Northern tower is higher than the Southern one.

Legend has it that Champa towers normally consist of 3 towers. However, the Twin Cham Towers has only 2 due to the cancellation before starting building the 3rd one.

Both 2 towers in Twin Cham Towers are not traditional multi-story square towers of Cham people. Each tower has 2 parts: square base and blocky curved tops, making it look like Khmer temple under Angkor Wat. On the wall, you can see many carved paintings of deity animals like birds and animals in the religion of Cham people. According to researchers, the image of holly birds with raising open arms in the corners of the towers shows a part of Khmer arts’s influence in the 12th and 13th century. However, the entire base and tops still remain typical features of Cham towers’s shape, structure, and decoration.

The foot of the Northern tower made of big sandstone looks like a giant lotus that supports the whole tower. On each sandstone, you can catch beautiful carved paintings of elephants, lions, and dancers. Like other Cham towers, it has a protruding roof to create a big roof edge. Under the influence of Khmer arts, the roof edge was made of stone and decorated with images of dancing monkeys, and the heads of lions and elephants, as well as the human with 6 or 8 arms. The 4 corners of the tower looks impressive with 4 giant stone Garuda holly birds which were carved in Khmer style.

IV. How to Get to Twin Cham Towers Quy Nhon?

Due to the convenient location of Twin Cham Towers which is just 3 km from the city center, you can easily reach this tourist site by taxi or motorbike.

Besides Twin Cham Tower, visitors to Quy Nhon, Binh Dinh can visit many other interesting towers. If you are interested in the great architecture of the Cham people, you can also take a look at the below list of popular towers in Quy Nhon.

Generally, Twin Cham Towers is a must-see attraction in Quy Nhon, especially for those who want to get to know about another community and its architecture. It just takes around half a day to discover these impressive towers, so don’t forget to add them on your itinerary. 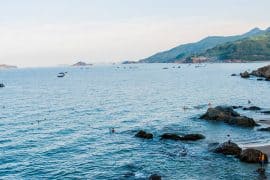 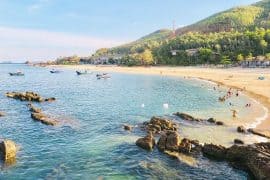