Phong Nha-Ke Bang (Phong Nha-Kẻ Bàng) is a national park in the center of Quang Binh province in north-central Vietnam. It protects one of the world’s two largest karst regions with several hundred caves and grottoes. Its name derives from Phong Nha cave, the most beautiful one, with numerous fascinating rock formations, and Ke Bang forest. The plateau is probably one of the finest and most distinctive examples of a complex karst landform in Southeast Asia.

I. Geography and Climate

Geographically, Phong Nha-Ke Bang National Park is located in central Vietnam, about 500km south of the capital, Hanoi, within the Quang Binh Province.The western boundary of the Park partially forms Laos-Vietnamese border, which is only 42km from the sea. The Park is found within the geographical coordinates of 170 20′-170 48′ N and 1050 46-1060 24′ E in Bo Trach and Minh Hoa Districts.

Like the North-central (or Bac Trung Bo) in general and Quang Binh Province in particular, the climate in this national park is tropical, hot, and humid. The annual mean temperature is 23 to 25°C, with a maximum of 41°C in the summer and a minimum of 6°C in the winter. Annual rainfall is 2,000 mm to 2,500 mm, and 88% of the rainfall is from July to December.

With more than 160 rainy days per year, no month is without rain. Mean annual relative humidity is 84%. The typical tropical climate has helped build up a pure atmosphere of the green ecological environment, ideal for any visitor.

Phong Nha-Ke Bang takes pride in its stunning nature that you may have to hold your breath on contemplating.

Here, there are the charming Son and Chay Rivers, (the two longest underground ones in the Phong Nha-Ke Bang), gently flowing in the middle of the two sides’ reed and green bamboo rows. Most of the caves here have been shaped by those two rivers. The Son River flows into the mouth of the Phong Nha cave, which is the only point where it emerges in around 20 km.

Far far away can you see the enchanting pure Bong Lai Lake and Chai waterfall, adorned with a number of dark violet flower baskets blooming in the warm weather. Some tourists ever uttered: “Wow! Heaven!” since the scenery is so much romantic and marvellous!

The Park also contains two dozens of mighty limestone mountains with over 1,000 m in height. Some of the most noteworthy peaks are the Co Rilata Peak with the height of 1,128 m and the Co Preu Peak with a height of 1,213 m.

Non-karst topographic area accounts for a low percentage, distributing mainly in outer circle of limestone in the north, northeast and southeast of this national park. The height of these summits varies from 500-1000  m with the deep divisions. The grandiosity and uniqueness of the limestone mountain ranges that only can be found in Phong Nha-Ke Bang is of great attraction to tourists.

The Ke Bang primary jungles have been home to 98 families, 256 genera and 381 species of vertebrates, many of which are listed in the Vietnam and World’s Red Book. If you are bold enough, you can go further into jungles to see by yourself these lively rare animals, Gecko, Macaque, and so forth. Watching them closely and directly is somehow thrilling but extremely interesting!

Besides, for those fond of plants, it’s good news that the tropical jungles have a huge number of tropical trees, grass, bush on limestone rocks and soil mounts, sindora trees, rattan and bamboo forest, and the nation’s greatest Calocedrus rupestris. It has 140 families, 427 genera, and 751 species of vascular plants, of which 36 species are listed in Vietnam’s Red Data Book.

Penetrating to a distance of 1,500 m inside Phong Nha Cave, tourists may go from surprise to surprise! Up to now, there are more than 300 caves that have been discovered, and still continuously shaped by the Chay River.

The Son River flows into the mouth of the cave and keeps flowing underground, where it is referred to as the Nam Aki River. The main Phong Nha cave comprises 14 chambers, connected by an underwater river that runs for 1.5km.

Notable caves and grottoes of Phong Nha include Phong Nha Cave, Dark Grotto, E Grotto, Cha An Grotto, Thung Grotto, En Grotto, Khe Tien Grotto , Khe Ry Grotto, and Khe Thi Grotto. The most famous one is Phong Nha cave, which has been considered as “First-ranking Cave Wonder” for its world’s most beautiful stalactites and longest rivers by the Brishtish Royal Geography Association.

Sitting on your boat along the Son River into the Cave, listening to the wind whistling as if in a Cathedral, you may be unable to return! As you get farther into the cave, the more illusory the stalactites and stalagmites look as they glitter when bright light is shone on them.

Here you can contemplate the splendid landscape of the ancient huge teeth-like stalactites falling and stalagmites roughly rising. The stalactite brilliant light stretches throughout the cave as a beautiful silk full of colors.

Each of the cave contains its own mysterious and miraculous secrets of the eternal dark Caves, stimulating and absorbing tourists to come and discover by themselves!

The oldest evidence of human occupation of the area are Neolithic axe heads and similar artefacts found in some of the caves. There are some relics of Ham Nghi King, a final King of the Nguyen dynasty before the French colonial period, at the Maria Mountain in the north of the Park.

Currently the Arem, Ma Coong and Ruc ethnic groups live in two villages in the core zone of Phong Nha-Ke Bang National Park. Until 1962 these indigenous people lived in the forest in houses made of bamboo and leaves or in the caves, living from forest products and hunting. They used simple tools and their clothes were made from the bark of a toxic forest tree (Antiaris toxicaria) and lianas.

Since 1992 the Government of Vietnam has set up two new settlements for these 475 people, who are the two smallest ethnic groups in Vietnam. These people are familiar with a number of economically valuable species, especially precious timber such as Mun and Hue (Diospyros spp., Dalbergia rimosa), and oil-extraction from species such as Tau (Hopea hainanensis) and many medicinal plants.

The Phong Nha Cave has long been a site of religious and tourist importance, with an old Cham Temple discovered in the cave and it was a site of worship in the ninth and tenth centuries. During the war with the USA the Phong Nha Ke Bang forest and caves were a garrison and weapons store for the Vietnamese army.

The presence of tall lowland forest, which is regionally threatened as a habitat type in the National Park increases the area’s conservation value.

The number of tourists has increased dramatically since the park was listed in UNESCO’s World Heritage Sites. Tourism activities in the area are the responsibility of the Trading and Tourism Department of Quang Binh province, with 280 international standard rooms in the province and 8 vehicles with capacities of 4 to 15 seats for tourist transportation. The forest guards of Son Trach commune in Bo Trach district are placed on tourist security duty.

Quang Binh Province has invested into upgrading the Phong Nha-Ke Bang visitor site to turn it into one of Vietnam’s major tourist destinations.

Multiple eco-tourist projects have been licensed for development and the area is being heavily developed by the province to turn it into a major tourist site in Vietnam.

Phong Nha-Ke Bang is part of a tourism promotion program called: “Middle World Heritage Road” which includes the ancient capital of Hue, the Champa relics of My Son, the city of Hoi An, nha nhac and the Space of Gong Culture in the Central Highlands of Vietnam.

Some tourist activities in Phong Nha-Ke Bang National Park are organized by local travel agencies and vary in form:

In order to facilitate the increasing flow of tourists to the site, the Dong Hoi Airport was constructed and is due to be operational at the end of 2008.

VI. What to Eat in Phong Nha-Ke Bang?

Quang Binh province boasts a number of specialties that stay long in every tourist’s memory.

The main ingredient of this food is of course, sweet potatoes that are grown on ground soil. First, people boil the sweet potatoes, then cut them into slices and dry by the heat of the sun for around 10 to 12 times. This food is often eaten as a snack, its natural sweet from the potatoes will make you feel melted at the tip of your tongue.

Noodle soup porridge is made of rice noodles, shrimp, snakehead fish and crab. The broth is thick and is added with chopped vegetables and some spicy flavor. When eating the food, local people often eat it with small fried spring rolls to create better taste in their mouth.

This is one of the most popular foods in Quang Binh Province. First, people mix braised pork, shrimps, cassava powder, wood ear mushrooms, river shrimps and some spicy flavors to make the stuffing. Then, cover them in banana leaves. The right way to eat the food is to dip it into the special Vietnamese fish sauce.

VIII. How to Get to Phong Nha Ke Bang National Park?

If you are in Hanoi, the best way to get to the site is by train, the Thong Nhat one. After arrival at Dong Hoi station, you could travel by road or by sea. Both are easy to use, yet the latter could bring you a realistic understanding of a riverside life.

Phong Nha-Ke Bang National Park displays an impressive amount of evidence of earth’s history. It is a site of very great importance for increasing our understanding of the geologic, geomorphic and geo-chronological history of the region. Your journey to Vietnam will be fulfilled with a day trip here. 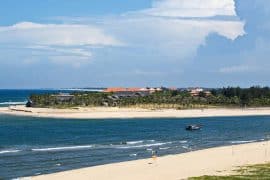 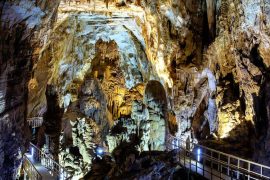 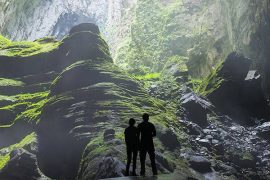 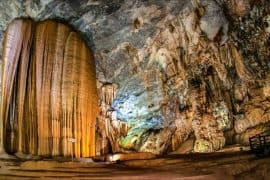