The Khmer ethnic people annually celebrated their traditional Ok Om Bok Festival on the full-moon day (15th day) of the middle Winter to shows their gratitude to the Moon Goddess for giving them a bumper harvest and rich aquatic sources.

Ok Om Bok is now a popular festival celebrated not only in Soc Trang but also in other Mekong Delta provinces of Vinh Long, Tra Vinh, Can Tho, Kien Giang and An Giang. In the Khmer belief, the Moon Goddess is the one who cares for the crops, aquatic sources and human life. Also called Festival of Worshipping the Moon, the Ok Om Bok Festival of each village takes place on the yard of a local pagoda, and the whole province’s Ok Om Bok Festival takes place at Ba Om Pond. The festival is one of the three typical festivals of the Khmer in the circle of one year.

Ok Om Bok features folk religion originated from Buddhism. The festival opens by a Ngo Boat Race (Um Tuk Ngua in the Khmer language), one of the most attractive activities of the Khmers. The race drew hundreds of thousands of Khmer people in the region and tourists nationwide.

On the noon of the 14th day, on the Long Binh River takes place the exciting Ngo Boat Race in the echoing sounds of the Five tones of the traditional musical scale and the resounding encouragement shouts of tens of thousands of audiences. The racing teams from different town and districts on the territory of Tra Vinh Province and neaby provinces bring a noisy and stirring atmosphere for the festival.

Ngo Boat Race is both a game and a way to express the strength of consolidation, as well as a traditional ritual to see off the God Water to the ocean after the growing season, and a religious ritual of the Khmer to commemorate the Snake God Nagar, who once turned into a lump of wood to help the Buddha cross the river. It is honored as a sacred relic, used only in essential festivals like Ok Om Bok and is kept and preserved carefully in local pagodas. The boat is about 24 meters long, 1.2 meter wide and is able to hold about 40 people. Sitting in two lines midway along the sides, young Khmer men and women move gently in harmony with the sounds of gongs and waves. As the first boat crosses the finish line, the crowds on both riverbanks cheer loudly and enthusiastically for their victory. Hundreds of people enthusiastically support their favourite teams and enjoy the race. Attending the festival, you will have a chance to watch the jubilant and competitive boat race of the Khmer people.

During full-moon the night, Khmer family members gather in front of the communal pagoda or their houses and prepare a special feast with green rice flakes, ripe bananas, fresh peeled coconuts and mangoes to offer to the moon.

When the God Moon rises, the offering ceremony begins with all family members sitting flat on the ground and clasping their hands in wait for the moon to rise. An elderly man expresses their gratitude to the moon and prays for continued good crops and good health. They prayed to the Moon for bumper harvests all the year round, prosperity and happiness.

A jubilant atmosphere prevailed over the celebration sites where large members of people gathered to enjoy folk art performances, including floating flames, flying balloons, and Khmer stage arts of Du Ke and Ro Bam. Then, the village elders will pick up handfuls of “com dep” to put into the children’s mouths with a wish for their strong eating and rapid development (the word Ok om bok literally means eating “com dep” by picking up it and put into the mouth). After the ceremony, they continue looking at the moon, while receiving green rice flakes from an elderly man and making their wishes. At the festive nights, tourists and locals walk in groups around the ponds and enjoy local food and buy souvenirs. All seem to forget tiring daily work and drift with the melodies and sounds of folk songs, diverse instruments and dance of the Khmer.

The night becomes more exciting with ethnic games and traditional fashion shows. Some join a contest of flying lanterns and silently contemplate the colors. A flying lantern is made with a bamboo frame pasted with paper. A tinder is tied under the frame then fired, which makes the lantern fly high in the air. The flying lantern rises higher and higher in a mysterious and romantic breeze as if bringing the hopes and beliefs of the Khmer people to the Moon God, who is tucking up the clouds to look down at the earth. At Ba Om Pond, the ritual of the flying-lantern release has become an exciting contest with the participation of tens of pagodas in the province under the encouragement of tens of thousands of festival participants.

The event also features water-lanterns made from bamboo and paper in the shape of a boat with colorful decorations. People make a line with a drum band ahead, whisper their prayers to God and gently drop paper-boats on the water. The river is indulged in peaceful and fanciful scenery. This is also the traditional time for couples to pray for their love and destiny. The festival celebrations also included traditional Khmer rituals and special performances by art troupes from other provinces. People also flocked to downtown Soc Trang for shopping at trade fairs and watching traditional sports and games.

Really interesting and meaningful, Ok Om Bok Festival is the most imposing festival in Mekong Delta. Once taking part in, and you will realize… 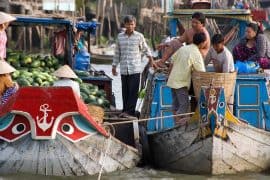 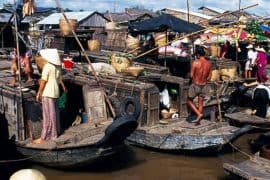 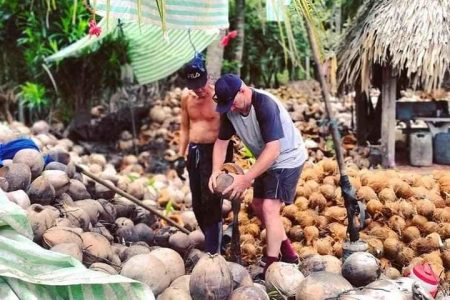 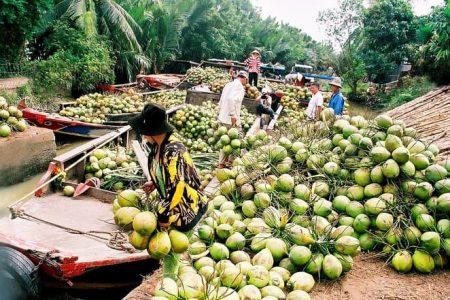 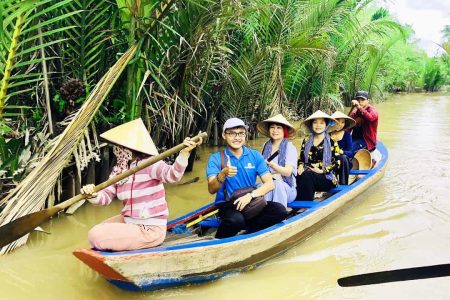 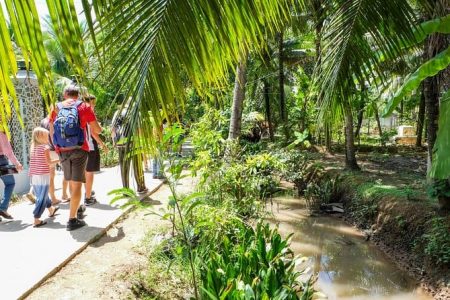